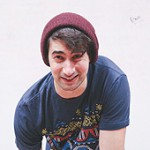 Richard Cox is one of the most renowned chefs, and we are happy to have him in our team. With cooking experience of more than 10 years, he is a desired guest on many TV shows and cooking masterclasses. However, he does not think he deserves a title of celebrity chef.

Richard was born in 1978 in Dallas, TX, to a family of a car mechanic and waitress. He was first introduced to cooking at the age of 12, when his uncle needed some assistance at a restaurant he owned. His mother worked there as well. After finishing a cooking school for teenagers in his hometown 7 years later, he entered the Culinary Institute of America in New York.

Shortly after his graduation in 2001, Richard became a sous chef in his friend’s restaurant “Craft”, where he had been working for 5 years before getting a job at “Patina” restaurant. Richard gained additional experience in cooking and culinary art in 2009 when he was invited to take part in the cooking masterclass of American Culinary Arts society members. Since then, his skills in cooking have been greatly improved.

In 2014, Richard Cox became a part of our Los Angeles team. For only two years of his work as a Head Chef of our restaurant, a lot of positive changes have happened to Giglio. James Stevenson, the owner of the Giglio Network, has recently stated that he has never seen such a great talent in the culinary world, and obviously, Richard Cox has breathed a new life into Giglio restaurants. “This fact made our restaurant chain very popular among Americans, and I appreciate it a lot”, he said.